back to normal view

My Dad was an exceptional man with great charisma and a genuine, generous, open-hearted soul; I miss him dearly... It is therefore a wonderful feeling to see him in so many images, shared by people the world over; still loved by millions and unforgotten... Thanks to some very dedicated friends, this new site was born. I wish it well, God speed, may it bring toghether all of my father's admirers... Happy New Year, may Peace prevail and my best wishes to you and your families.

He has his place in movie history as Tarzan and Old Shatterhand. From being discovered as Tarzan arose the first immortal-hero status for tall, athletic Lex Barker, which was confirmed when he played Old Shatterhand and Kara Ben Nemsi in the Karl May series of films after he moved to continental Europe.

The purpose of this website is to maintain the memory of the simpatico American, and be a tribute to a film star and a life that will remain unforgettable. 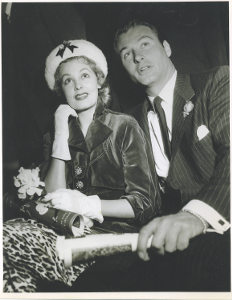 Her trademark was her titian-red hair and in the early nineteen-fifties she was considered one of the most attractive Hollywood actresses. She starred in the 1952 Western movie "Ambush" with Robert Taylor as well as in the swashbuckler movies "Caribbean" (1952, with John Payne), "Jamaica Run" (1953, with Ray Milland) and "Bengal Brigade" (1954, with Rock Hudson). She also played in the Jules Verne movie adaptation of "Journey to the Center of the Earth" (1959, with James Mason).

Arlene Dahl was one of those old-school actresses of the motion picture city, her image immaculate, her look fashionable and elegant. Her on-screen appearances stand for perfect Hollywood entertainment — but also for typecast roles. One of the few parts not complying with this predefined image was in Alan Dwan's "Slightly Scarlet" from 1956, where she played a malicious ex-convict and sister of the equally red-haired Rhonda Fleming.

Arlene was not perturbed by her Hollywood typecast but set out to tackle other fields of work. Simultaneously to pursuing her acting-career, she worked as a columnist for different women's magazines, and furthermore she founded a lingerie and cosmetics company. In 1951, when she was still married to Lex Barker, she had already started writing her beauty column "Let's be beautiful" for the Chicago Tribune. This column was kept going for more than 20 (twenty!) years.

Arlene's business enterprises kept her in the public eye, even after she had left Hollywood and settled down in Manhattan. At that point in time, her life wasn't revolving only around acting anymore. Nevertheless, up to the 1990s, she could still be seen in some productions like "The Love Boat" and "Fantasy Island". In 1972, she had even starred in the leading part of the Broadway musical "Applause" which was based on the 1950 Bette-Davies-movie "All about Eve".

Up to an advanced old age, she remained amazingly present in New York City. Altogether, Arlene was married six times. After her marriages to her fellow actors Lex Barker and Fernando Lamas, Marc Rosen was her last husband.

Lex Barker's son Christopher who had been like family to Arlene, was deeply saddened when he heard about Arlene having passed away. Christopher said that he would always remember her as the fascinating lady she had been, highly active to a progressed old age. He said that she had always been there for him whenever he had needed help and had now peacefully passed away. Christopher Barker says that Arlene was forever grateful to be remembered by so many of her fans in Germany.

In honor of her life, TCM (Turner Classic Movies) dedicated a whole commemoration day to Arlene Dahl. Click on this link to watch the trailer: https://www.youtube.com/watch?v=MbVuV6lSZSE.

Here you can read an interview with Arlene Dahl from the year 2007.

After the passing of her fellow actors Lex Barker and Pierre Brice, and of movie composer Martin Boettcher who, a long time ago, had written the heart-tugging sound tracks of the Winnetou movies, Marie Versini, another of our matinée idols is now dwelling in the eternal Karl-May-hunting-grounds.

Not only did she star in the absolute classic of Winnetou 1, but also in other movies of the Karl May series. There are The Yellow Devil (1964, as Tschita), The Wild Men of Kurdistan (1965, as Ingdscha), Fury of the Sabers (also 1965, as Ingdscha) as well as Thunder at the Border (1966, as Nscho-Tschi once more). Not counting the latter, she always co-starred with Lex Barker in these movies.

On screen, Lex Barker in the role of Old Shatterhand, had been the object of Nscho-Tschis unrequited love. Lex's son Christopher, having been in close touch with Marie Versini, received the bad news of her passing away with deep regret. "I would like to express my sincerest condolences to her family. Let's fondly remember her along with her movies and the friendly encounters of many years. She will be sadly missed." Barker would have loved to celebrate with her the 60th anniversary of the cult movie Winnetou 1 in 2023.

To read an interview with Marie Versini click here. 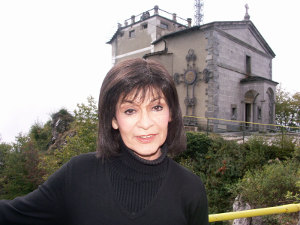 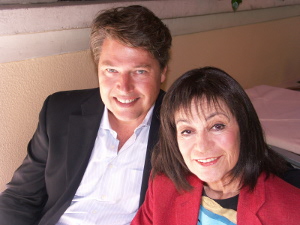 It is an interview conducted in the year 1959 by TV presenter Wolf Mittler of the Bavarian public television channel "Bayrisches Fernsehen".

It shows good-humored Lex who had come to Munich to guest-star in the TV series  Tales of Vikings which was filmed at the studios in Geiselgasteig.

On November 15, 2019 the musical The Speech of Chief Seattle was performed by Michael-Gemeinschaft in Schweigmatt, Baden-Wuerttemberg (Germany) Jean-Marc Birkholz, the popular performing actor of Winnetou at the Karl-May-Festival in Elspe, read the words of Chief Seattle's speech. Christopher Barker, son of the late legendary Old Shatterhand Lex Barker held the prologue.

Amongst others Barker said "... together with our children all of us can relearn to appreciate and maintain our Good Mother Earth. We can show our children that as adults, we too, believe in the future. Let's give our children the space and the time that they need. If needed, let's donate some of our time to people  parents, friends, colleagues. If we don't do so, Chief Seattle's speech will still remain valid but won't it be ourselves who will be lost?" An unforgettable evening, especially for all the visitors of the subsequent Meet & Greet fundraiser who were awarded the musical bonus of Christopher Barker singing two songs. 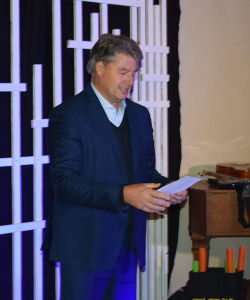 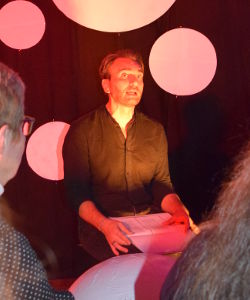 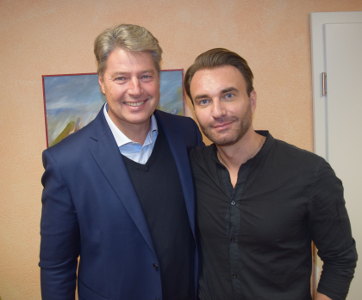 "They say there was snow that day, that the flowers in the garden were killed by frost." That's what many years later, Lex is supposed to have said about his birthday. He was named after his father Alexander Crichlow Barker. His place of birth is the sleepy town of Rye, NYS. Right in the middle of a park, you can find a sturdy brick building, the house where Lex was born.

At the early age of 54, Lex Barker died of a heart attack in the streets of New York. One hundred years after the day he was born he may be gone but not forgotten. Although there are only about 30 miles between the two places of Rye and New York, Barker was a cosmopolitan and left a special impression worldwide.

The German western productions of the 1960s are 'classics' nowadays. The cinema and television audience has retained the movies in its cultural memory. Reiner Boller's 2018 handbook about the German western, Wild West made in Germany, describes this very special phenomenon based on the movies and the actors of this genre.

Author Reiner Boller conducted research for many years, visited archives and filming locations, and spoke with many people involved in making German westerns, especially the Karl-May movies. During the exhaustive work, two people in particular extended much appreciated assistance to Reiner; Matthias Wendlandt, whose father produced the famous Winnetou film series of the 1960s, and Christian Becker, the producer of RTL's new filmization based on May's famous tale. Of course, the new handbook, Wild West made in Germany, also presents to the reader previously unpublished details about Lex Barker and the production of his famous Winnetou movies.

You can find former news in the archive.